One of the perks of traveling to Namibia via the Kgalagadi Transfrontier Park is that you get to make use of the border posts situated at the entrances to the park. I’ve already told you about the beautiful border post at Twee Rivieren, and we got to experience the border facilities at Mata Mata as well. 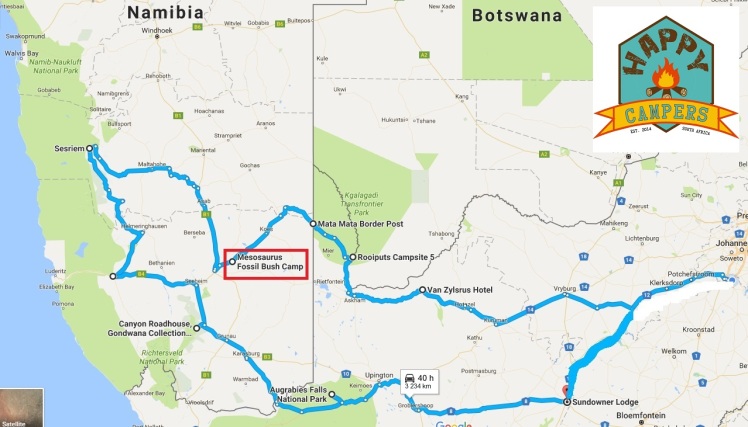 Basically you sign out at the Sanparks reception and then you drive a few metres to the Namibian border post. The office were neat and clean and we managed to get all the paperwork stamped and fees paid within half an hour. We would have liked to stop at the well-known Sitzas Farm Stall which is located just outside the border post but unfortunately they were still closed by the time we went past them.

A few kilometers down the C15 heading towards our next stopover we had our first encounter with a snake in the bush!! The excitement levels were in overdrive as we’ve never seen a live snake up close in the bush. We had panicked moment or two when the snake actually slithered underneath our SUV, as we’ve heard many tales about snakes climbing into your vehicle via the chassis and engine but luckily it appeared on the other side of the vehicle and went its merry way. Turns out it was a mole snake that we saw. Even though they’re not venomous, they can be quite ferocious if backed into an uncomfortable situation and they have been known to be easy biters, if they feel threatened. We weren’t planning on testing this theory so we left as soon as the snake disappeared into the long veldgras.

We stopped for a quick bite to eat at the C15/D511 intersection and we travelled to the C17 via the D511. All gravel roads but they were in an excellent condition and we had a lot fun driving up and down the dunes. By the time we got Koës one of our travel companions wasn’t feeling well so we pulled over at their general dealer and bought some fresh bread and snacks for the rest of the road trip towards Mesosaurus Fossil Camp. We were still traveling on gravel roads by this time and as we would discover the following morning, one of our vehicles picked up a slow puncture somewhere.

Mesosaurus Fossil Camp was nothing like we expected it to be. They’ve got two types of accommodation which includes chalets and bush camping. Naturally we chose to camp at the bush camp sites which were situated a few kilometers away from the main reception, in an area that was overflowing with quiver trees and giant rock formations. We also booked a guided tour to the fossil site with the owner of the camp site, Oom Giel but first we had a couple of hours to ourselves at the camp site. The kids went nuts for the rock climbing and as soon as camp were set-up they were gone into the koppies. We took a walk about the camp site which consisted out of 6 or so camp sites, spaced comfortably away from your neighbors with a very rustic but neat ablution block. Running (hot) water and flush toilets were much unexpected indeed and we were hi-fiving ourselves for choosing to stay at Mesosaurus Fossil Camp. We had a huge sociable weaver nest in the tree at the camp site that we chose so that means we kept an eye out for Cape Cobras who are known for foraging these nests for food.

The tour of the fossil finds were fascinating and Oom Giel was extremely knowledgeable. It was actually his son who found the fossils 25 years ago, when he was 10 year old. They have donated some of the fossils to museums in some of the bigger towns in Namibia but there is quite a few of them left at the actual farm. Oom Giel told us about the history behind the fossils and then he took us a bit deeper into the farm where he told us more about the quiver trees and the giant rock formations, and how they were formed. Turns out that thousands of years ago, Namibia had quite a few active volcanoes and it was volcanic pipes that became hard and eroded over thousands of years that lead to the formations that we saw all over the southern parts of Namibia. He also played a couple of songs on the rocks which were quite special to experience.

On our way back to camp we saw a bat eared fox running across the veld which we haven’t seen on this trip so far so we were very chuffed with our sighting. We also decided to be a bit more careful with our food at camp as this meant that there were some wildlife around the camp sites, and we weren’t liking the idea of a jackal eating up our supplies so early into our holiday. After an awesome dinner we cleaned up the kitchen area and got into bed after our hot shower at the rustic ablutions.

The next morning had an early start to Keetmanshoop but we were delayed when we discovered the slow puncture on one of the vehicles. Due to us running late it was decided that we’ll repair the puncture when we got to Sesriem, and we only left Keetmanshoop for Sesriem at 10:00.

This site uses Akismet to reduce spam. Learn how your comment data is processed.

Adventure Bent
Haiku out of Africa

Our Life in Letlhakane, Botswana

Getting lost and finding stuff since 2012. A blog by Jeff & Kerryn.