On the morning of Day 4 it was time for us to get up early and pack up camp to move to our next destination – Mata Mata rest camp on the SA/Namibia border. We’ve never been to Mata Mata before so we were excited to experience a different part of the Kgalagadi, and also to see the famous giraffes that has been relocated to this part of the park, many years ago….

As the Kgalagadi is an arid park (very dry and desert like conditions), there are quite a few types of animals that you won’t find here such as crocodile, elephant and buffalo, to name but a few. Giraffes are one of my favorite animals and I was looking forward to seeing them in the wild.

The road to Mata Mata is a gravel road with some sandy sections but it was very easy to manage and we didn’t even have to deflate the tyres too much. Sanparks really put a lot of effort in the upkeep of these gravel roads and if you stick to the guidelines on sand/gravel road driving you’ll be contributing to keeping the roads in a good condition. We saw plenty of wildlife on the road to Mata Mata – lots of Oryx and springbuck, as well as blue wildebeest were everywhere. The birds of prey sightings were plentiful and we also saw our very first Kori Bustards on this drive. But the morning belong to two huge male lions that we encountered just as we turned out of the Rooiputs camping area. They were quite some distance away from each other but they were calling out very loudly and it was an awesome sight to see them running in each other’s direction.

There is a very famous landmark about one third of the way to Mata Mata, the Auchterlonie picnic site and museum. It tells the story of how a series of water holes were dig in the park, to supply the SA troops fighting in WW1, in case they decided to invade Namibia (then called South West Africa) from that area. Poor people from the area were hired as guards of these bore holes, and they were given permission to settle in the area and to farm the land. The SA government decided against this route in the end and the guards were half forgotten and due to the harsh conditions in the Kgalagadi, they abandoned their farms and the bore holes became water holes for the animals. At the museum there are quite a lot of artifacts and structures to be seen and the little house offers some awesome photo opportunities as well. There is a neat ablution block at the picnic site and several tables and chairs which proved to be a very popular breakfast stop on the road to Mata Mata.

We arrived at the camp site shortly before midday and proceeded to set-up camp at camp site no 16. Camp sites cannot be pre-booked so if you’re lucky you can choose your favorite camp site, which we did. We were very private as the boundary fence were right in front of us and we put up our camp with our backside turned to our neighbors so it felt like we were the only ones at Mata Mata. We had water and power supply points at our camp sites the resident meerkat and squirrel colonies were on our doorstep. We had a lot of fun watching them but we steered clear from feeding them, as we didn’t want them to become a nuisance. It was quite evident that previous campers didn’t share our sentiments as especially the squirrels were very cheeky, coming right up to us begging for food. The one little guy actually had a go at my son’s finger so I don’t think it will be too long before they get removed from this area. Such a pity as they were very cute to observe.

Game viewing were very much the same as in the southern parts of the park and we were fortunate to see both cheetahs and lions on our second day in the area. The cheetahs were feasting on a springbuck lunch and they were having their hands full with keeping scavengers such as jackals and vultures at bay. We would have never seen them by ourselves but luckily a family that was already watching them pointed us in the right direction. It was quite some distance away so apologies for the poor quality of the cheetah pictures.

The lions were a completely different story as they were sleeping in the parking area of the Sitsas water hole. After a short while one of the lionesses got up and led her three little cubs out of the tall grasses as it was time for them to feed from her. They were adorable and unfortunately we didn’t get a very good look at them. This sighting was my first experience of people hogging a sighting in the Kgalagadi. There were people parked in the area that were there for quite some time and they just refused to move on so that the other vehicles could also get a good view. I know that this sort of behavior is common in other national parks but I always thought that Kgalagadi visitors were different and more courteous. Maybe it’s because the park is becoming a lot more popular these days, and it’s attracting visitors that would usually not visit the arid parks, I don’t know, but yes, we were quite disappointed in the people’s selfishness. Anyhow, we did get to see them properly on the way out so we stopped and took a few pictures before we left the sighting.

The following morning we got up quite early to pack up camp and head into Namibia, via the Mata Mata border post. We really enjoyed our stay at Mata Mata and I would love to visit this area again. 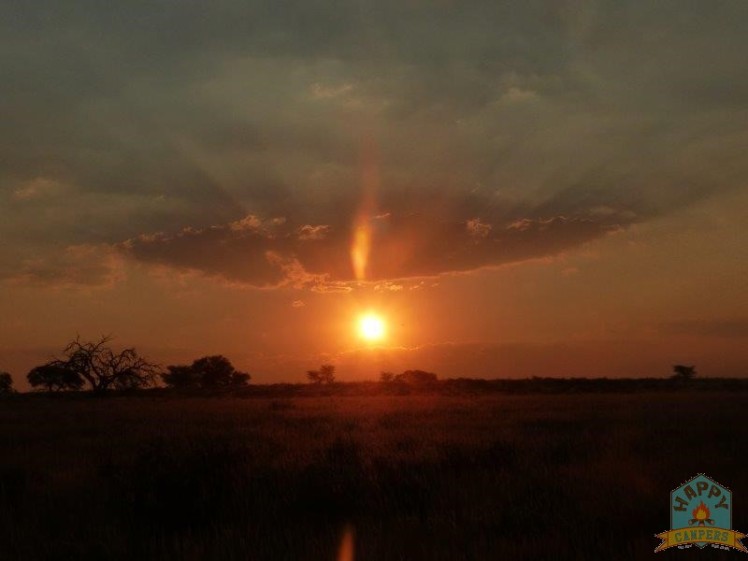 This site uses Akismet to reduce spam. Learn how your comment data is processed.

Adventure Bent
Haiku out of Africa

Our Life in Letlhakane, Botswana

Getting lost and finding stuff since 2012. A blog by Jeff & Kerryn.